The Privilege to Act

I took a chance and hit two auditions today that were not my usual fare. One was playing an uptight homophobe in the new Off Bway play called "Hit the Wall." The other was for an old fashioned play from the 1930s-50s. I do a monologue by Paddy Chayefsky that's a passionate declaration of love, and it was such a treat to go from playing such a closed person in "Wall" to a woman making a stand for love in the other play. It really was a rush, and each audition room felt so full of possibility, alive with potential because of my commitment to these characters and their needs. It was an absolute blast and reminded me of why I love acting in the first place, that feeling of being creative and unfettered, playing and discovering. I love it!
Posted by Laura at 12:40 PM No comments: 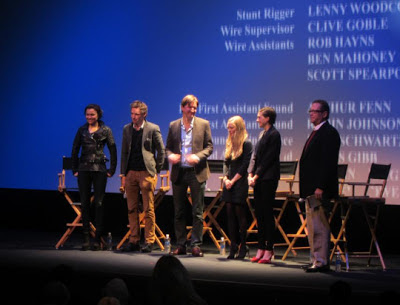 After the debut screening of "Les Miserables," director Tom Hooper (center) and cast members Samantha Barks (Eponine), Eddie Redmayne (Marius), Amanda Seyfried, and Anne Hathaway, joined Lincoln Center monitor Annette Insdorf (not seen here) for some Q and A with the audience. It was incredibly cool. The actors were asked about how they prepared for their roles, and Tom Hooper cited Victor Hugo's novel as the main source they all went back to. Anne Hathaway said she investigated the lives of sex slaves, which was heart-breaking, and they all talked about the stamina needed for singing through this musical. 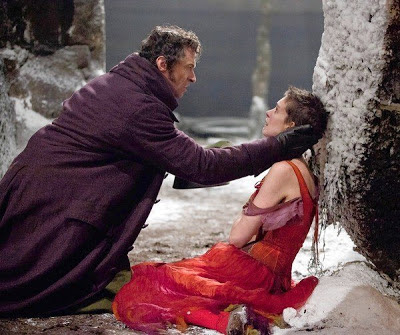 I was impressed by Tom Hooper's decision to keep the musical sung-through. It's pretty much operatic in that vein, but I thought it worked. He said he had consulted Baz Luhrmann on this topic, and I was glad he did, because Baz Luhrmann's "Moulin Rouge" is one of my favorite movie musicals.

Another question that was asked was about everyone's first experience with the stage musical and how it affected them. I thought that was a great question, and I want to pose it to you:

Where were you when you first heard about or saw Les Miz?

I was 19, and I was at the American Musical and Dramatic Academy. Upon hearing me sing, one of my classmates said I had to sing "On My Own" from Les Miz, and she shared the music with me. I ended up singing the song in a talent showcase where I met my future husband, so it has special significance to me.

I later worked with Gina Milo, who had understudied Eponine and got to perform the role on Broadway. She and I became close in Lucky Stiff at Mason Street Warehouse. She was the quirky ingenue, and I was the big belty bad girl, so of course we had a blast together. 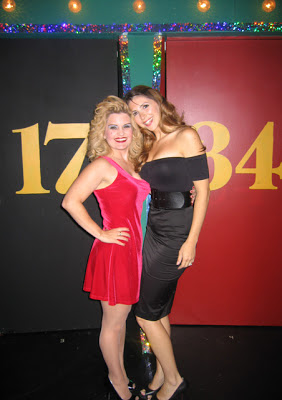 I recently did a musical theatre round table with some cast members from the Les Miz tour and Broadway production, so I got to see first-hand rehearsals of "Stars" an "Empty Charis and Empty Tables." It was really incredible work!

Seeing the film version of Les Miz yesterday made me think of these talented performers I have been fortunate to play with, and I'm inspired to keep working in the field. As Tom Hooper said in last night's Q and A, there is something extra emotional that comes out of an actor when they sing. It's like they access another part of themselves and bring something else to the table.

I was incredibly fortunate to see an advanced screening of the film, Les Miserables, at Lincoln Center yesterday. Tom Hooper, the director, welcomed the massive crowd, saying he had just completed the film at 2 AM, so we were the first audience to see the movie in its completed form. You can imagine how special that made us feel. 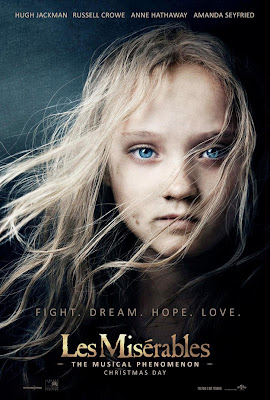 The film, as one friend put it, was EPIC. The opening scene was amazing, and I don't want to spoil it, because it was so powerful. People should see it for themselves.

Hooper said he looked to Victor Hugo's novel to guide him through the musical, and I was very impressed at the references to the novel. Granted, I don't remember much of it since my last reading in high school, but ValJean's strength was something that was highlighted, and through Hooper's interpretation, I realize this was physical as well as inner strength of spirit. 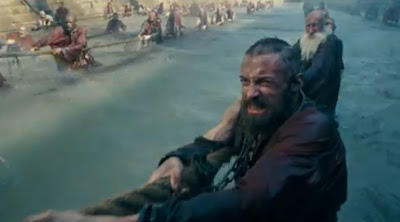 Hugh Jackman was fantastic as Jean Valjean, a man who serves 19 years in prison for stealing a loaf of bread and trying to escape the harsh confines of prison. He was brilliant.

The whole cast did an incredible job, particularly Anne Hathaway, as Fantine, a woman struggling to make ends meet for her daughter, Cosette. I have heard many renditions of "I Dreamed a Dream," and Anne's is completely new, raw and real. There was not a dry eye in the house! 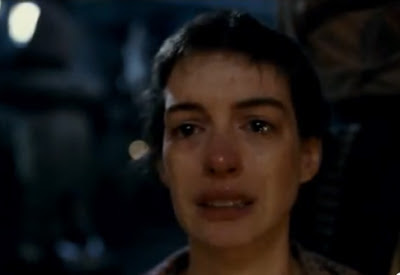 I heard one audience member say he felt the film filled in gaps in the musical, because the story-telling was so strong. It was clear why every character was doing what they were doing.

One thing I missed from the stage play was seeing the whole body of the actor particularly in the solos. There were some intense close-ups that made me uncomfortable, but left me in tears, so I guess something was working! :) But I do feel the film will still drive people to the stage musical, because both have something different to offer audiences.

Something I loved about the film was the environment. Everything was so visceral. I felt like I was in this world with the characters. 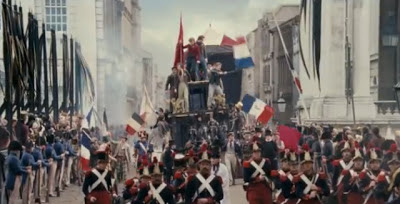 The ensemble piece "One Day More" was particularly well done, and I loved seeing the personal journey of each character as they raced to get to tomorrow while trying to grapple with the present.

I'll leave the rest of the critiques to other reviewers. Suffice it to say that the film and music have stayed with me, and I'm sure everyone who sees the film will have a very personal reaction.

It's been a weird couple of weeks, and that's putting it mildly. As "life goes on" here on the East Coast, I can tell many of us New Yorkers are still trying to "find our feet" after the devastation of Hurricane Sandy. We're trudging to work, thankful to have jobs to go, but we're all exhausted. 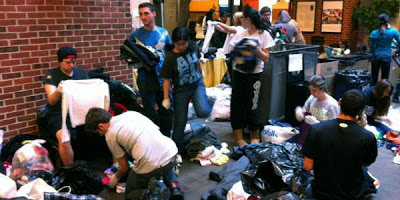 I have two jobs. I'm an actress and I work with an online advertising company below Canal Street. We just got access to the building this week. Everything looks "normal," but you can tell people are still devastated. So many people are still without power, or power is intermittent.

I was called into some auditions this week, and it's been interesting getting to and from places. Thanks to the MTA workers for making things happen so quickly with the subways and trains! 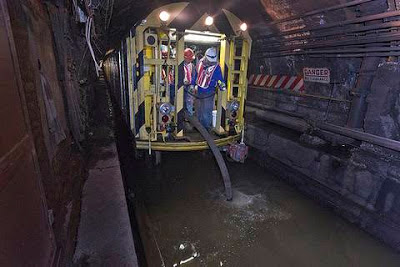 I keep thinking of what Judi Dench said about "acting is a job" and sometimes you don't want to go "out there," but that's your job: to go "out there."And boy, have people been putting themselves out there in amazing ways, donating time, food, clothes, power sources...

Facebook has been helpful because friends and "friends of friends" are shouting out for help or providing it, and we all are sharing the info. There is a definite sense of community. 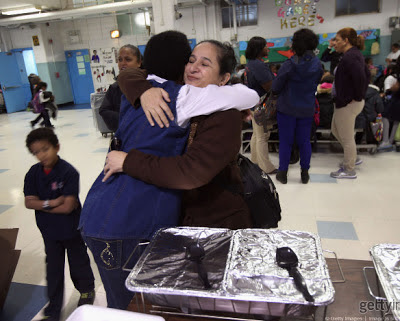 In Manhattan, people seem to be speaking kinder to each other. I ask everyone I run into - absolutely everyone - if they're ok, how they were affected by the storm, and they look at me in shock, but then we share that "where were you when" moment, and there's a sense of comfort and connection. A little kindness goes a long way!

We all were affected by this terrible disaster, and I am thankful for so much. May we all share kindness and compassion at this time. Every day would be great!

If you or someone you know needs help, US.gov has a ton of links and helpful info.