Happy New Year! 2006 is already off and running it seems. After some hectic holidays, my new year has begun by wrapping up the lead in a short film and by getting called in for Grizabella in CATS as well as "Sin" in a new musical of "Paradise Lost." Too much fun.

The film was such an interesting experience. I've done background and stand-in work for The Sopranos and Sex and the City, so I knew how long a shoot could go: 12-14 hours a day usually amounts to a 1-3 minute scene. So to play the lead in this upcoming short film meant putting in some long hours, but it should well be worth it. 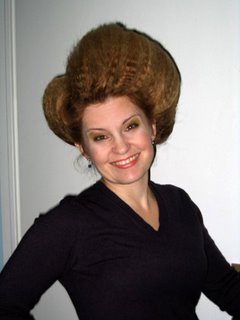 Hair and makeup alone took a few hours for me, because they took me from my usual self (on the left) to the Bride of Frankenstein (on the right). My character was a bit kooky and the director had a specific look in mind for me. It took some getting used to, but I ended up feeling like Madeline Kahn, which was great fun. 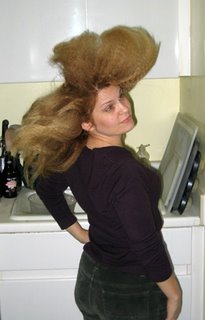 So Mel Brooks, if you're looking for the next Madeline Kahn for your musical version of "Young Frankenstein," I'm your girl! :)
Posted by Laura at 8:39 AM 1 comment: