Last week was a whirlwind! I had the pleasure of performing my own one woman musical, "Love in 35 Minutes" on Monday night at The Aurora and on Friday night at Stage Left Studio (www.stageleftstudio.com). It all came about because I was supposed to do a group showcase, but everyone backed out right at the halfway point. And I thought, "I have invested all of this time and money and effort into this. I'm not going to give up!" So I didn't! I went through about 20 probable songs, cut it down to 10 and then wrote a show around those 10 songs. It was pretty easy, considering almost every song dealt with the pursuit of love, the celebration of love, the loss of love, and the resolution of love. It all fell into place.

I had some great helpers along the way. My graphic designer boyfriend created the postcard. :) 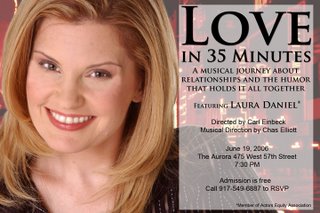 Carl Einbeck, one of my very best friends, who is also a brilliant writer and actor, always wanted to try his hand at directing, so he came on board and did a fabulous job at directing the show. Chas Elliott, voice coach and opera aficionado, took on the role of music director and pianist and played beautifully.

Both nights and both venues were packed with full houses, and the audiences seemed to enjoy the show. Lots of laughs and joyous comments.

I had so much love and support and encouragement just getting to where I needed to be, and once I performed the piece, I received tons of fabulous feedback, mostly with people asking, "When are you going to do it again?"