This has been a busy month for me, working on new projects by wonderful writers I'm lucky to know! :)

On May 4, I had the honor of singing in a cabaret honoring female writers of musical theatre: 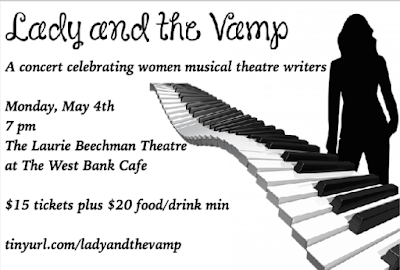 Clare Cooper asked me to sing one of her pieces from her show with Bryan D. Leys, "How to Marry a Divorced Man." This re-teamed me with Richard Binder, who's played my husband in many shows! In this piece, we played exes who have a tender moment, much to the chagrin of his new love interest, played by Tiffan Borelli, who also rocked a song from "Urban Momfare" by Pamela Weiler Grayson: 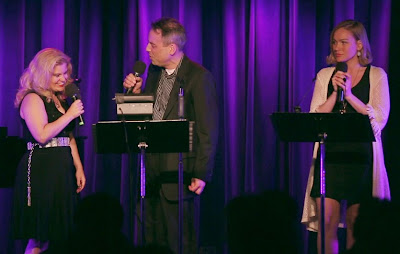 Then, on May 18, I played a sister mourning the loss of her brother in Rob Cardazone's new play, Terribly and In Private. It's an exquisite 5 character play that re-teamed me with my "Petunia" co-star, Wayne Henry, and gave me the opportunity to work with Andrew Schulz, whom I met in Heidi Marshall's on-camera class. Andrew is an incredible actor from The Actors Studio who recommended me to my current acting coach, Susan Aston.

Rob was mentored by Romulus Linney (father to Laura Linney) and Arlene Hutton, whom I met when I auditioned for her play, Gulf View Drive. Small world! Rob and I worked together a gazillion years ago at the PA Renaissance Faire, which was the basis for his play, "Ren Rats," which premiered at the Hunter Playwright Festival in 2013. Reading a play like Terribly and In Private took me back to my drama roots and was such a delicious piece to dive into! Hope to do so again soon!
Posted by Laura at 1:27 PM No comments: