It's not even Spring yet and I'm already a busy bee! 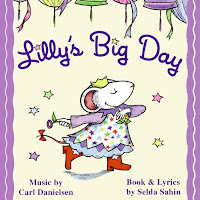 There's snow all over New York, showing that winter is reigning supreme, but my heart and spirit and schedules are more akin to Spring Fever! I've been getting so many calls for audition appointments and workshops for future productions, and it's great!

Yesterday, I recorded the lead role of "Lilly" in a demo for the new children's musical, Lilly's Big Day, and what a treat that was! The music was AWESOME and made me think of fabulous composers like Jule Styne, Irving Berlin and Stephen Sondheim. Just joyous, quality stuff! It was a delight to sing, and it was a thrill to dive into the role of a 4 year old mouse!

A producer once told me I had a great voice for cartoons, and I tell you, after yesterday's experience, I really do want to do more in the voice-over realm. SO MUCH FUN!

The neat thing about doing a recording is that you get to hear the "playback." The sound engineer plays back what you just recorded so you can assess if you need another take/recording, and so it was really neat to just hear the scenes unfold after performing them. It reminded me of voice-over work I'd done for a short film a while back: nothing done in sequence, so the scenes were all crystal clear on their own, but once it was all put together for the final product, wow! Magic!

Our music producer for Lilly's Big Day was Josh Margolis, and he was just great! Carl Danielsen, an actor of great warmth, talent and humor, composed the music and played the teacher, Mr. Slinger. The clever script, adapted from Kevin Henke's book, and the lyrics were written by the lovely Selda Sahin. She also voiced one of the students. Emily Whyte played my mom. Adam Shonkwiler and Emily/Ginger rounded out the cast, and everyone was so sweet and lovely and had such unique voices. It was a thrill to do this recording with them, and I look forward to our further adventures.
Posted by Laura at 7:54 AM No comments:

Reflections on Rock
or The Evolution of Laura Daniel

I am reminded of the film, School of Rock, but this class was for musical theatre performers who needed to expand their skillset for the current explosion of pop rock musicals. It was a BLAST! I watched all of my classmates go from straight-laced musical artists to sexy soul-singers, and it was a pleasure to bloom with them.

I think the most startling realization of all was that, like Dorothy from The Wizard of Oz, I had the power all along. :)

I was reminded so fiercely of my early musical career wher

e I played Dorothy in The Wiz. Unusual casting, I know, but I became known as The White Girl with Soul. And later when I was cast as Audrey in Little Shop of Horrors, people were astounded at the rockin roar that would come out of me.

Even recently with The Singing Nun I found myself serenading the audience with 60s pop in the midst of a dark musical comedy.

So I'm bringing "Sexy Back" to myself, and I'm having so much fun! The cherry on the cake is that my auditions have become this free-spirited raucous romp! At last Friday's RENT audition, the creative team were generous with praise and excitement about how much they liked what I did. So if people are having fun with me, I know I'm on the right path. Rock on!

What a wonderful world

It has been such an interesting month! February is known for being one of the coldest months of the year, but I have felt such a great deal of warmth and friendship and creativity.

I started the New Year with VP Boyle's Pop Rock Workshop. One of our first assignments was to create a journal and have fun decorating it. So I brought out my old paintsets and started crafting! I tell you, I felt like I was 5 years old! It was such a joyful experience, and every time I've taken this notebook out to write in it, I've felt fabulously creative!

Ironically following this positive pulse, a lot of cool projects have been coming my way. A friend asked if I'd sing the lead role in a demo for a new musical, and a producer I met from the NYMF Awards Gala has asked me to workshop another new musical.

Last night, I performed in Astoria's Playmaking Program, and the producer Taryn Drongowski already asked if I could take part in the next series. It was so much fun! The plays were written by Horace Greeley middle school students, and various actors and directors with a wealth of Broadway, Off Broadway and regional theatre experience helped bring the plays to life.

The young writers were brought onstage and sat in a director's chair while we performed their plays. You had to see the smiles on their faces! All of the kids were simply beaming and everyone had fun! There was lots of laughter and such a sense of goodwill and kindness. It was a pleasure to be a part of it.
Posted by Laura at 9:58 AM 1 comment: 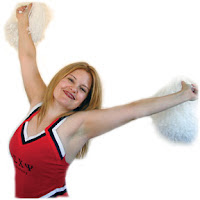 4 auditions in one day! Gotta love it!

I remember when I first moved to the city, and I'd be in line, waiting all day to be seen for one audition, and I'd hear other actors talking about all the auditions they had lined up for the day, and I'd think, How can they do all that in one day?

Well, I now relish the opportunity to go from one audition to another.

On Monday morning, I started at the Actors Equity building and sang for Musicals Tonight. Then I changed into a stunning red dress and boogied down to the Hilton Theatre to audition for "Young Frankenstein." I jumped back into my uggs (it was 10 degrees, remember) and I trekked down to another studio to audition for "Xanadu." I've been taking a Pop/Rock workshop, so I was prepped with fun material for this upcoming Broadway show. Soon it was after 1 PM, and I had an appointment in Chelsea for the new rock version of "Carmen," so I hopped the subway and cruised down to the studios. I did another quick change into jeans and a sexy black top, and I was ready to ROCK! My audition ended at 3 with the creative team applauding for me above their heads like it was a rock concert. That felt GREAT!

And today I hit two auditions: one for the upcoming musical of Shrek and the other was a dramatic audition for The Women's Project. And I received great response from both! I feel so much freer in my auditions now, I feel good about my work, and I sense that I'm making an impact. People are really responding to my work and it feels fabulous!