What a Difference a Year Makes!

It hit me today that it was exactly one year ago that I launched my one woman musical, Love in 35 Minutes, and I feel so good! I've been thinking about writing another one woman show, and I'm taking notes as I go. It feels a lot like planting seeds in a garden or cooking different dishes on a stove. I have to wait and see what sprouts or is "done" first.

In the meantime, I'm just enjoying the whole process, and when I think back to last year and all that has come to fruition, I'm just amazed! Like doing Love in 35 Minutes, directed by my dear friend Carl Einbeck, and then going right into The Tragic and Horrible Life of the Singing Nun, working with such amazing people on that piece! Winning the NYMF Award for Outstanding Individual Peformance, meeting all sorts of incredible people at the NYMF Gala, including Broadway stars and producers... Cultivating my craft with awesome people in awesome classes, working on The Onion's Country Music webisode, hitting auditions and seeing casting people and directors respond so powerfully to my auditions, whether it's with laughter, smiles and words of encouragement, or absolute physical reactions like diving onto my resume when I've completed my work. It feels SO GOOD!

Now I'm prepping to go to Mason Street Warehouse to play a character I adore: Rita in the Ahrens & Flaherty musical Lucky Stiff. Not only do I love-love-love the show (I did it at the Astoria Performing Arts Center two years ago), but I also received a note from my mentor, VP Boyle, letting me know he will be Associate Director for the piece, which is awesome!!! Working with VP is like working with Willy Wonka. He's so inventive and intuitive and FUN! He definitely brings magic with him wherever he goes. And I've heard wonderful things about Kurt Stamm, the Artistic Producing Director, as well. A lot of NY actors have nothing but high praise for these two fellows and I'm absolutely delighted to be working with them this summer. Woo hoo!
Posted by Laura at 1:52 PM No comments:

This has been such an interesting month in that I've been meeting up with cast and crewmates from The Tragic and Horrible Life of the Singing Nun. It's been like a reunion of sorts, all of us catching up with each other and celebrating our strides forward. It's been delightful!

Krsitine Zbornik, who played my Mother Superior, recently won a MAC award for her amazing cabaret at the Metropolitan Room. Expect to see this talented funny lady on Broadway soon! 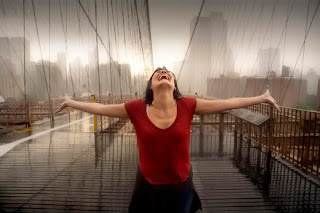 Tracey Gilbert, who played my love interest in Nun, shared this incredible photo with me of her, taken by Gary Matoso who has this phenomenal project called "Everyday People. Every Day." Isn't it cool? I love that I get to share this life ride with all these wonderful people who are passionate about life and making good art. It's very cool.

I also recently celebrated my Singing Nun producer, George DeMarco, who had a birthday last weekend. He is one of the sweetest people in the world, and is so passionate about the theatre. Like Company's producer Steven Baruch said 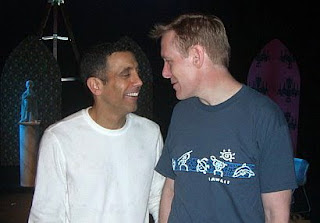 in his Tony award acceptance speech last weekend, "Producers have dreams like everyone else," and I'd love to see George's dreams come true.

Andy Monroe, George's partner, not only wrote the music and lyrics for Singing Nun, but he's also working on a ton of other projects and he wrote a beautiful song for George's birthday called, "By George." It was lovely!

I feel so blessed to have met these wonderful people, to have worked on the awesome musical about Sister Smile with them, and to celebrate each other as we grow as artists and friends.
Posted by Laura at 2:22 PM No comments: 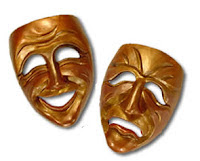 The Tonys were last night and they did a great job, showcasing NY theatre for the whole country to see. There were some inspirational performances. I loved all the musical presentations, and I'm so glad they showed some scenes from the dramatic pieces as well, because those are often overlooked.

Frank Langella is a marvel! Watching him and Christopher Plummer (who was nominated for Inherit the Wind) is like taking a master class. What phenomenal actors! And I loved Mr. Langella's acceptance speech:

"There's a line in Frost/Nixon which says, 'Success in America is unlike success anywhere else. That feeling when you are up is indescribable....' The line then goes on to say, "But there's another feeling -- when it's gone, to somewhere else, to someone else." And I know that feeling. Everyone in this room knows it. I suppose we can't stop people from putting us into competition with one another and once we are here, I suppose we all want to win. But I think we must honor the common bond in us, the struggle, the striving for success, because that's a race you simply can't lose. I am very proud and very honored to live and work among you splendid people, thank you. Thank you for giving me that indescribable feeling. I wish it for you all."

And Christine Ebersole's salute to "the Edies -- may they live in our hearts forever because those who take the journey, when they come and see Grey Gardens, help us get in touch with our humanity and our innate goodness."

Spring Awakening composer Duncan Sheik affirmed that "musical theatre rocks!" and writer Steven Sater asserted that "dreams really do come true." We singer/actors are so thankful for composers and writers like these two who push boundaries and give us all such wonderful playgrounds to explore in.

Lastly, my favorite speech was from Jay Johnson whom I've loved since I was a kid and would sneak peeks at the comedy TV series, SOAP. Jay won for his one man show, The Two and Only:

"To everybody that ever had a dream, always believe."

Congrats to all of the Tony Award Winners and nominees. Not only did you entertain brilliantly this year, but you moved people to expand their horizons, and you inspired artists like me to keep on growing. Bravo!
Posted by Laura at 7:26 AM No comments: