You know that feeling when you're shifting gears on a car and you're about to go faster? It's especially exciting when you're driving a stickshift, but even with an automatic, you can feel the transition of gears, and there's this thrill of speeding ahead. I feel like that with my life right now, that I've got my hand on the stickshift and I'm shifting into high gear! Woo!

A lot of people have been asking me about Broadway Idol, and while I didn't make the next round, I've run into a lot of friends who said they had trouble voting or that they never received confirmation that their vote went through. Another Idol contestant whom I ran into at an audition mentioned that his entourage had the same problem, and it surprised me that he didn't make the next round either, because he was really good too, so I'm guessing the process was a bit buggy. All in all, I felt good about my song, worked with wonderful directors and producers, received great feedback from the judges, and have been approached by several new folks who wanted to tell me how much they enjoyed my performance. Also, there's been an outpouring of love and encouragement from my friends and family all over the country who couldn't make the show. So it's all good.

I was called in for the new musical Wine Lovers, and get this: the director is Holly Anne Ruggiero, who was one of the judges for the intial Broadway Idol audition. She was such a doll to work with and called me back for the final auditions for Wine Lovers. Today was dancing, singing, reading more scenes. It all felt really good, so keep your fingers crossed! :)

I also booked a voice over for a short film, Coyote, and I did that recording yesterday. So much fun! We spent hours trying the scene in all sorts of ways. It'll be fun to see what the director decides to use for the final cut. Will it be my smokey, sultry voice or my Valley Girl voice? LOL

More stops along the way: I had an interview with an agent, and that was really lovely. Some strong possibilities there. I'm also prepping for a song presentation at BMI for Andy Monroe's next project, The Kid, and I'm just enjoying this wonderful life ride, meeting other people and diggin it that we all have a part to play in this multi-facted gem of a business. So cool.

Zooming off into the sunset. Catch ya later!
Posted by Laura at 12:28 PM No comments:

I love the New York Musical Theatre Festival. I had heard of it a few years ago when they first started up, and it was this yummy little big deal of a festival that has just kept going and growing... like the Energizer Bunny in a field of sunflowers! :)

Two years ago I auditioned for them and received phenomenal response. Then last year I booked the lead in The Tragic and Horrible Life of the Singing Nun and ended up receiving the NYMF Award of Excellence for Outstanding Individual Performance. Woo hoo!

This year I'm performing in NYMF's Broadway Idol. It's like American Idol but more localized to the New York theatre scene. Jess McLeod is our fabulous director, Christopher D. Littlefield is our rocking musical director, and Eric Louie is our lovely producer. It is a thrill to be working with all of them!

Performances start this Friday September 21st at 10 PM at Stitch Bar and Lounge (247 West 37th Street). If you're in the city, come on by! It's sure to be an absolute blast!
Posted by Laura at 6:19 AM 2 comments:

Since I got back from Lucky Stiff, I've been a busy bee! Not only am I immersed in living life to the fullest, embarking on auditions and working on my craft, but I'm making sure to take in more theatre. After all, it's one of the reasons I'm here! So when my voice coach Carl Danielsen invited me to "Hooked," a showcase at The Zipper Theatre, I had to go!

It was one of the most fascinating experiences I've ever had and reminded me keenly of The New York Musical Theatre Festival, which I performed in and won an award in last year. This event was more of an intimate concert, a mix of musical theatre and performance art, and The Zipper was the perfect place for it! The theatre has fun, stadium-style seats that are like cushy car seats built for two. And the sound system is great! They also have a lighting designer who has an excellent sense of how to enhance the mood of a song.

Speaking of which, the music was certainly intriguing! There was a very funny song about a man becoming First Lady, written by Drew Fornarola and Scott Elmegreen. Carl Danielsen and Selda Sahin had three passionate pieces about love, life, and travel that are still noodling about in my head. Raymond Bokhour did a music hall number about a British transvestite. The outrageous Aussie, Anna Copa Cabanna, accompanied herself on xylophone and grooved along with what looked like a speak-and-spell. Then there was Corn Mo, a former ringmaster who reminded me greatly of a young Meatloaf. He closed the show with a song he had written for Una, an incredible trapezist who hosted "Hooked." Una climbed up a rope onto a trapeze onstage and did this magical routine while Corn Mo sang about flying like an angel. It was WILD. And beautiful!

Only in New York!

So here it is September already. How the heck did this summer go by so fast? My family in Southern, CA are still having a major heatwave, so I hope some cool weather comes their way soon. Today in NY it's sunny and gorgeous and I can't wait to get out there!

But now it's time for a quick picture break. Here are more pics from my Lucky Stiff run at Mason Street Warehouse in Saugatuck, MI: 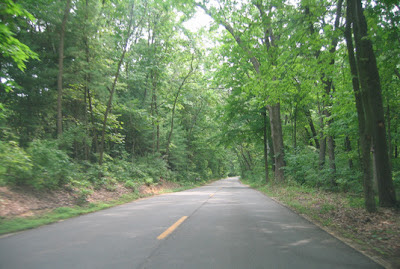 It was always a lush drive to the theatre. Come rain or shine, it was like cruising through a cathedral of trees! 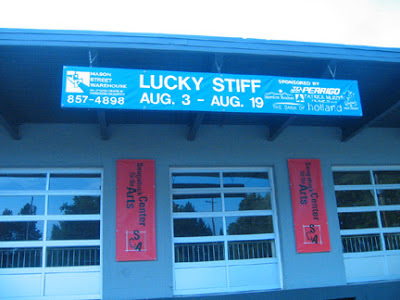 The theatre itself was in a really neat, industrial-looking building that had once been the town's pie factory. It sat 300+ people and we sold out! 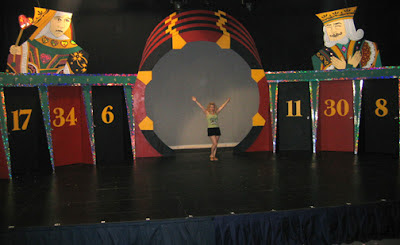 The stage was a great playing space and made me think of many theatres Off Broadway. And our set designer, Todd Engle, was amazing!!! His wife, Ellen, was our Company Manager, and she took great care of us. 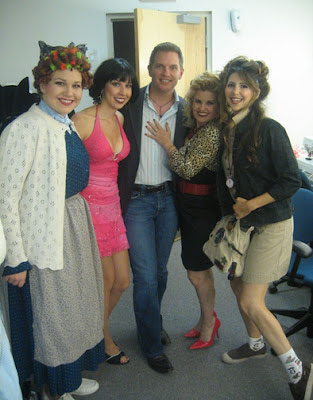 Our director, Kurt Stamm, was a dreamboat with a knack for physical humor. Here we are on opening night with the terrifically talented girls in our cast (from left): Sandy Zwier (ensemble), Lindsay Foreman (Dominique), me in the red heels as Rita, and Gina Milo as Annabelle.
Posted by Laura at 9:49 AM No comments: