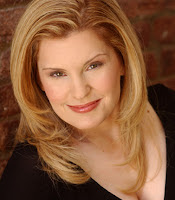 A few years ago, I played the character of Rita in Lucky Stiff at the Astoria Performing Arts Center. It was such a blast and I always hoped to play Rita again. Well, Mason Street Warehouse offered me the role! I'm so excited about it. Everyone at the callbacks was so professional and at the top of their game, so I know it's going to be an incredible show.

I also had an amazing experience at an audition few weeks ago. I was auditioning for the 78th Street Lab, which is currently producing The Nibroc Trilogy. I had the pleasure of meeting the playwright, Arlene Hutton, at the audition and she was so generous with fabulous feedback on my monologue. We chatted a bit and she invited me to the show to get to know the characters of The Nibroc Trilogy, and I was absolutely enchanted. I cannot recommend this show enough! It

was beautiful! There was a Tennesee Williams kind of flavor to it, but there was also so much warmth and humor that made the piece wonderfully unique. I also found the subject matter (the growth spurt the US was going through in the post-war 50s) so appropriate for today's world, for looking back to the past to see what kind of changes we need to make to create a better world today. It was about family, and I have a feeling a lot of people could relate to it. The show was haunting, charming and is sure to delight many audiences, I'm sure!

Finally, I also heard from the folks for The Tragic and Horrible Life of the Singing Nun, and there's good work being done there. Things are moving right along and it'll be exciting to see what develops. 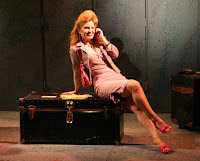 I have to laugh at the irony of my last two callbacks, because they both required big hair, a big voice, and big everything else.

Now the nature of callbacks can happen at ANY TIME - from immediately after the initial audition to 24-48 hours later, or sometimes even months later! As an actor, I'm asked to prep very quickly and then make changes on the fly. But it's a wonderfully fun ride.

My most recent callback was for The Onion's upcoming webcast about a fictitious country singer, and it was hysterical! I read from the script, improvised a scene with the director, then I sang a little bit of Dolly Parton's 9 to 5 and received great feedback from everyone including the cameraman and an Onion worker who could hear me from outside of the audition room. It felt GREAT!

The week before that I was called in for the lead in Lucky Stiff at Mason Street Warehouse. It was lovely to be considered for the sweetly heroic Annabelle, but I've played the comedic villain, Rita, before and I have a strong understanding of that wildcard of a character. I prepped for Annabelle, went in and sang, and they liked my sweetness, but asked for something a little more whacky. Well, that was like handing me the keys to a sportscar! I bounced into a fun and feisty song and when I finished, they said, "Oh! You're more of a Rita!" :) So they gave me the script and asked me to come back.

It was so freeing to get to play such a ballsy, unbridled character like Rita again, and it was a great lesson for me to not over-think auditions, to just do what I do and embrace my own bigness. My auditions since then have yielded great feedback and interest. Directors have taken time to chat with me and have asked me to show them more of my work. It's been very cool.

For Lucky Stiff, I made it through the final round of callbacks. The director only had one request... that I go with "Big hair! Big EVERYTHING!" So I had a blast playing with my clothes, hair, and of course the script and music, and the director was absolutely delight with the results.

The lesson learned: "Your playing small doesn't serve the world." And since I'm just shy of 5' anyway, it certainly doesn't make sense for me! I've always felt larger than life, especially onstage, and that's where we can be as wild and free as we want to be. "Free your mind and the rest will follow."

And as a friend of mine used to say, "Embrace your 3 B's! You are big, bold and beautiful!"