The March For Our Lives

Last weekend felt like the whole city of New York showed up to March for Our Lives. I knew so many friends and colleagues who were going, including people who were heading down to DC, and I wasn't going to miss it! If there's anything I've learned from people who've marched before me, it's that we must make a stand. I did it for the Women's March, and I was definitely marching for the kids.

I sprained my ankle a few days before, so I could only get so far. But I ran into my friend, Marta, and walked with her for 20 blocks. I took lots of pix, and marveled at the masses of people who kept moving towards the March. This was miles upon miles of people, and I couldn't get the song, "Found Tonight" out of my head.

My favorites were the Bubbes (Yiddish for Grandmothers). I heard one woman say, "I was out of town for the Women's March, so I couldn't miss this one!" 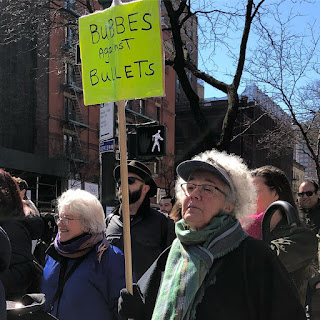 As I went home, I saw an old man with a cane. He was walking by a young man - his son? his grandson? - and he said, "See what people can do when they put their minds to it?"
Posted by Laura at 4:46 PM No comments:

It's been a leonine March. "In like a lion, out like a lamb," they say, but March is almost over, and we're seeing lots of stormy weather.

Still, there's something about a Snow Day that just totally appeals to me. I grew up in the CA desert, so snow always seems so magical.

Adding Lady Gaga and Tony Bennett to my groove helped me get through the pelting icicles.

When I was a kid, I was obsessed with my grandpa's movie camera. My mom inherited it, and my Dad started using it to film home movies. Me being an actor, I kept asking if we could "make REAL movies" with it, but film was expensive so I only got to make one. It was called, "The Seasons," and it starred me and my neighborhood friends, including Kara Herold, who went on to make documentaries about the female experience.

Flash forward to this February when I did a 6 day film challenge led by Ela Thier, who teaches at the Independent Film School. I had a BLAST! Each day had a different focal point, and it made me look at my world - and hear it! - with different eyes and ears. It also gave me a chance to explore editing and all the cool things I can do with iMovie. My final film, incidentally, was called, The Seasons:

I enjoyed this so much that I created a YouTube channel called, Laura Loves NY.  I'm a Southern CA girl who's always loved NY, so I've decided to show you around "my" New York.

Last month, I visited The City Bakery, which does a yummy hot chocolate fest in February:

And I'm going to keep on running around the island. If there's any place you'd like to see, let me know!
Posted by Laura at 9:03 AM No comments: