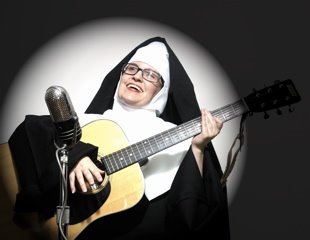 I was called back twice for Urinetown at the Gateway Playhouse, I had a callback for the Broadway production of Hairspray, and I was offered the title role in the brand new musical, "The Tragic and Horrible Life of the Singing Nun."

The minute I read the script and began to research the real Sister Smile, I was hooked! It is an incredible story of the meteoric rise to fame of the Belgian nun who wrote the song, "Dominique." Sadly, her life after that one hit was quite tragic as she became addicted to pills and alcohol, hence the "tragedy" of the title. But there is plenty of "heart" here also, as this is a woman who struggled to find her "truth" and also tried to come to grips with her love for a woman.

The tale is told by a drag queen nun named Coco Callmeishmael, so right away you know this show is going to be out of this world. But that's the charm of it: outrageous one moment, heartfelt the next.

The brilliant comedy writer Blair Fell first wrote the play about the Singing Nun almost 10 years ago. Producers George Demarco and David Gerard thought it would make a fantastic musical. And right they are!

Composer/lyricist Andy Monroe has a gift for creating music that delights the heart and the mind and takes you on an amazing journey. The opening number is brilliantly catchy and driven, and there's a pop love ballad in the middle of the show that will haunt you.

Director Michael Schiralli is an absolute gift! He has worked with some of the greatest performers of our time, and it is miraculous to be working with him. He understands the comedy and the tragedy of the piece, and is the perfect guide on this musical ride.

The cast is exceptional! The crew is so talented! Music Director Robby Stamper is an absolute guiding light, and our stage manager, Mel McCue, is so organized, all while remaining professional, compassionate, and funny.

Playing Sister Smile is especially rewarding. Getting to sing all this new music as well as the famous "Dominque".... There's something so magical about it. And the character is an actor's dream, providing the opportunity to explore broad humor and absolute heartbreak in the same show. Truly a magnificent experience.

Tickets are selling fast - we're already sold out for opening and closing night at St. Clements Theatre on 46th Street. But the real hope is that this show - like so many others at the NYMF will be picked up for a long-term run Off Broadway or even Broadway. It's a good show - I'm so in love with it - and I think everyone will be moved by it too. I certainly hope so. :)
Posted by Laura at 12:12 PM No comments: