Confessions of a Chameleon

I recently had new headshots taken by the wonderful Ben Strothmann, whom I met after he took production photos of The Tragic and Horrible Life of the Singing Nun for BroadwayWorld. He captured almost every moment of that musical so beautifully, so when I found out he also took headshots, I had to meet him. 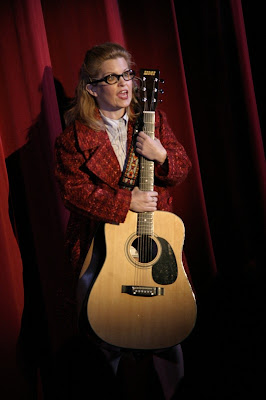 Almost any actor will tell you how excruciating headshots can be. I know, it sounds bizarre, because as actors we want to be in front of the camera, especially for film and TV, but it's usually while we're in character. It's a strange and funny thing that many actors are actually quite shy. I've even read about how some A-list actors will adopt a sort of red carpet persona in order to deal with the pressure of walking the red carpet. Yet as true artists we want to get our art out there, and we are our art, so we have to get out there!

Our calling card - especially starting out - is our headshot. This picture functions as our business card, a visual introduction to casting directors, talent agents, and just about anyone in show business. So getting a headshot that captures your essence is key. That's why I like working with Ben. Taking photos with him is like having coffee talk with an old friend, full of laughter and fun, all while sharing dreams amidst clicks of the camera. He's a delight to work with! 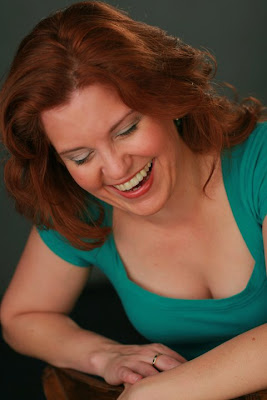 I recently went from being a blonde to a redhead, hence the reason I'm feeling so chameleon-like. Why red? Why not? My family has the genetic code of graying early - I started getting silver hair when I was 16 - so I've tried just about every color out there. I went blue- black for a role, and that color stayed for quite a while. Boy was it hard to get out! Then I went blonde, and it was fun to play the roles that went with that like the mobster molls and ditzy dames. 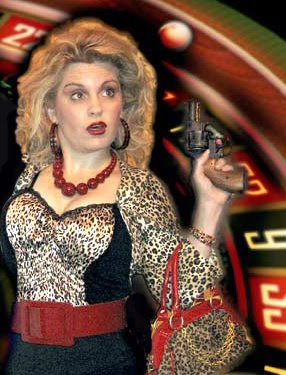 But my friends and cohorts in the biz kept saying there was more to me than being a blonde, and that they missed the earthy sassiness that seemed to emanate from me when I sported a darker look. Amazingly, quite a few of them urged me to go red. So I have, and I like it immensely. I've also noticed a stronger receptivity to my look in auditions. Towards the end of being blonde, there almost felt like a disconnect, because I'd get such high praise for my talent, but there was also that feeling that something about my product wasn't quite meshing. But now with red, it seems like people are really looking at me, and they have that look in their eyes like they want to buy my brand, so that has been very encouraging. 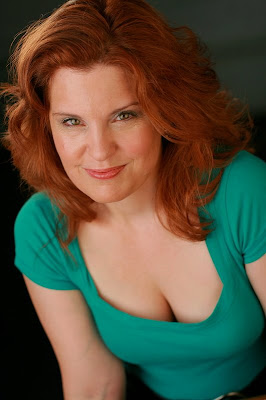 So now I start rebranding, continuing to hit auditions, work out at the gym, take classes and work on my craft. We'll see what this new 'do does. :)

Think bold. Be bold. This has been my mantra today.

I had an awesome audition yesterday for the Judith Shakespeare Company, a very cool company in Manhattan that is known for non-traditional casting for women, specifically with Shakespeare's works. Women are often cast in the male roles, and vice versa. Their productions always sound amazing and I would love to work for them.

It's a wild thing, auditioning, and great courage is required. Almost every famous actor will say how glad they are NOT to have to audition any more, because it can be really nerve-wracking. But I'm getting to the point where I almost love that adrenaline rush that happens when I walk into the room. 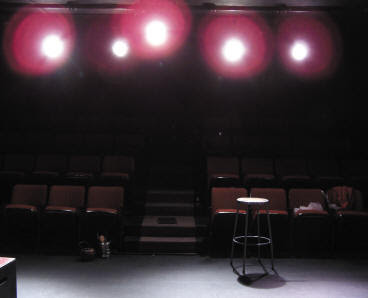 Yesterday's audition was at the Abingdon Theatre, and I've always enjoyed that space, walking through the darkness of the wings (backstage area), moving onto the little stage in the round, stepping into the light, seeing the auditors and welcoming them to take the ride with me. It's an exciting feeling and I love that I'm learning more about the characters and the playwright's intentions, serving the play itself, every time I do a monologue or sing a song. It's a connection to the material that I've never felt before. I feel like I'm really getting to perform the roles I've chosen for my audition pieces, and that's a thrilling feeling.

It's taking 2 minutes and turning that into a mini theatrical experience and enjoying it, being in it, breathing it.

Art can happen at any moment, and those 2 minutes that we get to audition can be the beginning of something incredible.
Posted by Laura at 12:44 PM No comments:

It's such an interesting time. There's a lot of change in the air. Can ya feel it? Just things shifting. And it's a good feeling. It makes me think of something my friend Tina and I talk about. We often compare our businesses to surfing. She's a small business owner of an herb magazine she created 7 years ago, and I'm the owner of my "company" as an actress, both of us wearing the hats of product development and marketing, among many others.

Anyway, we've often said how any kind of business is like surfing. You start on the beach, surveying the sea and then you throw yourself out there. Sometimes you catch an incredible wave, sometimes you wipe out, but you get back on your surfboard and try again, knowing the reward will be truly sweet. 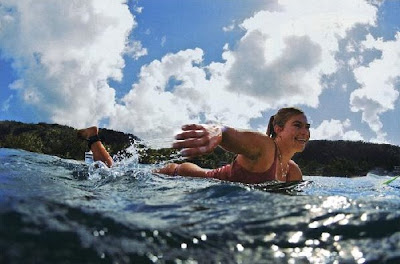 Sometimes you get out there and ride between the swells, gauging when to move towards what might become a big wave.

I feel like that right now, that I'm not just sitting on my board between the swells, but that I'm maneuvering, moving towards something that could be incredibly cool.

I have classes planned for the summer and auditions on the horizon. My friend from Hell's Belles, Deb Radloff, and I are going to revisit our idea for a cabaret with my Singing Nun musical director, Robby Stamper. 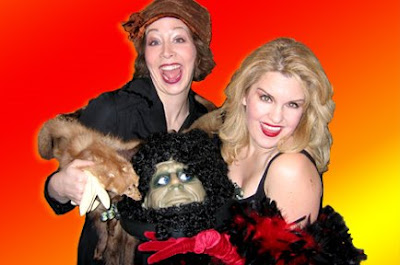 As I watched the Tony's last night, something that rang out for me about the whole thing was dedication to one's art and to one's family. Nearly every winner thanked his or her family and friends for their love and support.

Marcia Gay Harden thanked her mom for helping her lug suitcases up several flights of stairs when she first moved to New York.

The 3 boys who won for alternately playing the title role in Billy Elliot (David Alvarez, Kiril Kulish and Trent Kowalik) thanked their families and teachers and the entire cast and crew, including my Kaboom director, BT McNicholl, who's resident director for the Billy's. I was so jazzed that they gave a shout-out to this great man and fabulous director whom I've also had the pleasure to work with. 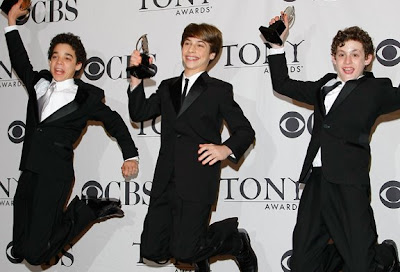 Gregory Jbara, who won Best Featured Actor in Billy Elliot, brought his wife onstage with him, which was so very cool! 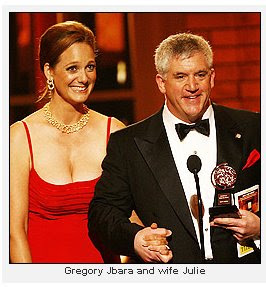 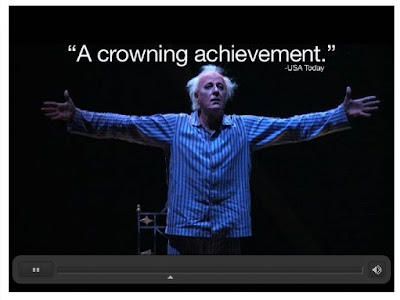 It truly was an incredible play, and I'm so glad I got to see it before it closes. Likewise with 33 Variations, which was also up for some Tony's, and which I hoped would get some recognition because it truly was an exceptional production.

I still can't stop thinking about either play, and I'm so glad I was able to see these productions with friends.

That's something I've really been doing this year more than any other: seeing Broadway and Off Broadway shows. Part of it's because I did 2 Off Broadway shows last year and it really hit me what an incredible community this is, that we all must support each other and encourage growth through art.

I've also been taking a lot of classes this year, and it just hit me, I live in New York City and I have the ease to see all of this amazing theatre, to learn from master crafstmen like Geoffrey Rush and Jane Fonda. So I'm doing it!

Seeing Angela Lansbury in Blithe Spirit was also like taking a master class, because the entire cast, the entire production oozed the style of the period, and it was so cool how the whole production was designed.

Likewise, Exit the King. I'm sure people will be grabbing up tickets like crazy, and I love that! Exit the King is such a comic "think" piece. Boy, did it make me think!

And I love that theatre can do that! It can teach, it can amuse, it can move you, it can make you go, "What was that?" It can make you look at life and the people in it and just make you marvel at it all.

Congratulations to all the Tony winners and nominees. You rock! 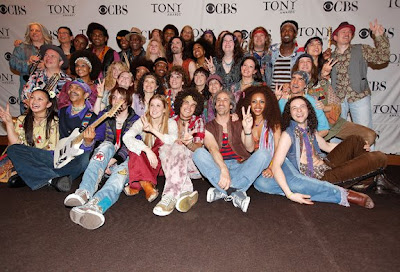