Masters of the Craft

Today's audition was brought to you by.... 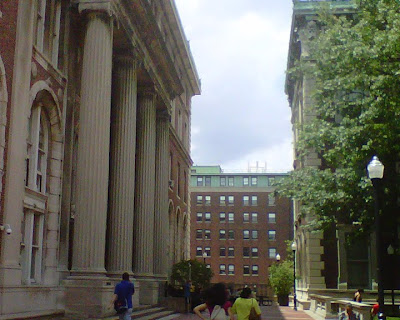 I really love auditioning at Dodge Hall. I've been called back for a few short films for the MFA program, and I also performed a scene for John Erman's master directing class. Today's audition was for a meaty role in a meaty short film.

It's just such a neat space and is always humming with artists seeking growth.
Posted by Laura at 12:49 PM No comments:

Last week, I got to see the amazing Edie Falco take the stage in This Wide Night. I so completely love her work in Nurse Jackie on Showtime, and when I heard she was doing this play, I had to see her work onstage - especially since she started as a stage actress. 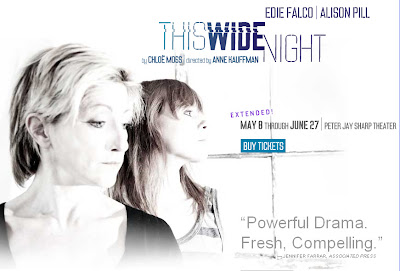 Plus I had auditioned for the understudy position of the younger character (this is a play about 2 women who've been in prison together) so I really wanted to see it.

When I picked up my ticket at the box office, I discovered the theatre was on the 4th floor. The door to the stairwell was locked, so I joined the crowd waiting for the elevator. It was funny because each audience member attempted to open the door, hoping to walk the 4 flights up to the theatre, but the door wouldn't budge. It was as if the locked door was Excalibur, and we hoped someone would be strong enough to pull it forth. 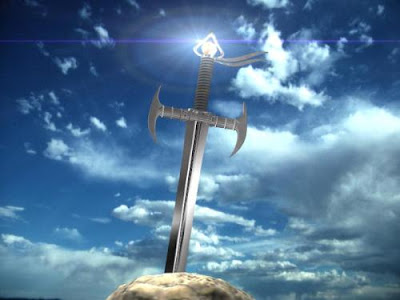 Suddenly a beautiful woman breezed in behind me. She was tall and wearing this gorgeous violet-colored blouse.

"Did anyone try the door?" she asked politely.

"Yeah," we all sighed. "We have to wait for the elevator."

When I took a second glance at this lovely lady, I realized she was Cherry Jones, the actress who originated the role of Sister Aloysius in the Broadway production of Doubt. 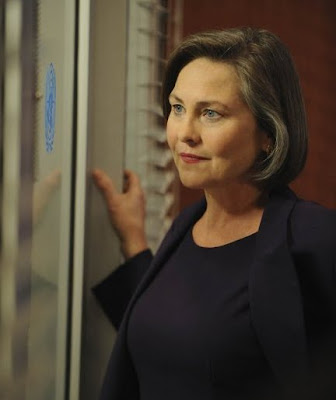 I wanted to say, "Oh my gosh! You are the reason I'm here! My best friends, Carl and Michael, saw you in Doubt and I always regretted missing your performance. That's why I'm here! To catch another tour de force!" But before I could say anything to her, someone else jumped in and gushed about how much they enjoyed her work.

Still, I thought it was a pretty cool sign.

When we finally got upstairs and into the theatre, I took my seat, which was front row center. It was a small Off Broadway theatre, but wonderfully deluxe, and I was about 5 feet away from the stage. When the play started, I felt like I was actually onstage with these women. It was so intimate - I could see tears spilling down their cheeks! 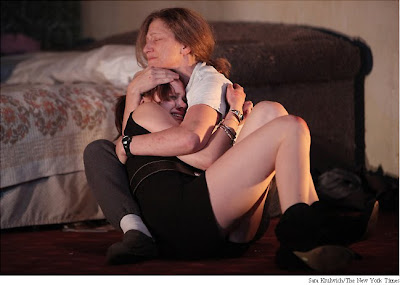 Edie Falco was lovely. I could feel her character's pain, masked behind her humor. And Alison Pill blew me away! It was like she was channeling her character. She WAS this broken prostitute! There was no artifice. It was a master class on acting, watching these two women work.

And I have a massive new respect for Naked Angels, who produced this play. I also love that actors like Cherry Jones and Victor Garber were there in the audience. It reminded me of when a 2-time-Tony-Award Winning actress came to see a staged reading I was in at Bleecker Street Theatre, and told me how much she liked my work. I was absolutely blown away by her generous praise, and incredibly inspired and delighted by these great artists who come to the theatre to support new artists, plays and musicals.

I feel so fortunate to be a part of it.
Posted by Laura at 2:12 PM No comments:

This week I've been running into some yummy blogs.

Bekah Brunstetter's Blog is a delightful look into the daily doings of one of today's up-and-coming playwrights. I recently read her play, OOHRAH! and stumbled upon her blog quite by accident. Well, what a happy accident! 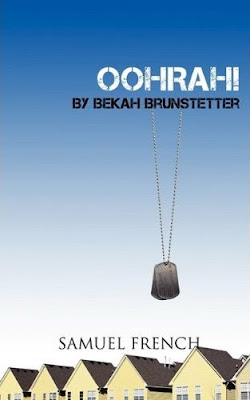 Then I found VP Boyle's blog on Broadway World, and was thrilled to see my musical theatre coach sharing his insights with the public at large. :) 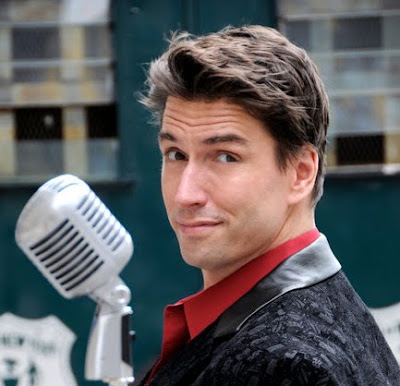 VP had coached me prior to my bookings of The Tragic and Horrible Life of the Singing Nun and Lucky Stiff, so coming upon his blog was like another happy accident, because I wasn't even looking for it. 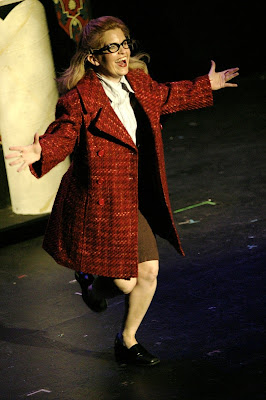 So of course, I'm reminded of Kung Fu Panda's wise turtle, Oogway, beautifully voiced by Randall Duk Kim, who says, "There are no accidents!"

My friend, Tina, is always sharing gorgeous pics on her blog, The Essential Herbal, and it is a sweet sweet taste of the country. 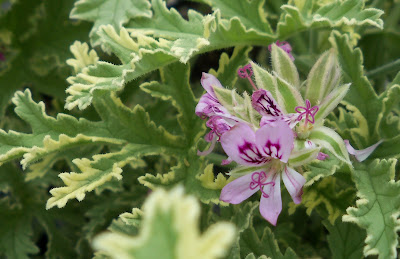 Here in Manhattan, I am always dazzled by something. My auditions and performances take me all over the city, and it feels like one delightful adventure after another. Last week, it was Times Square. There was just something delicious about walking around the city in the morning after signing up for an audition. It was remarkably peaceful and quiet, which is unusual for Times Square.

Today, I was at an audition downtown on Bleecker Street, and I just love going down there. 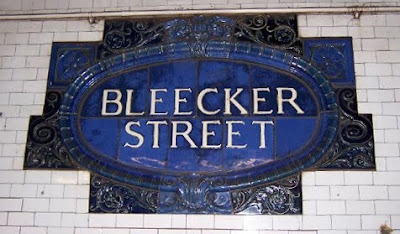 It's a street that connects the East and West Village, and I just love how artsy and edgy it is. 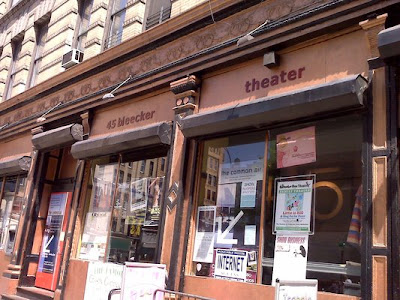 I've auditioned at the Bleecker Street Theater a few times, and performed Got You on the mainstage there last Fall. 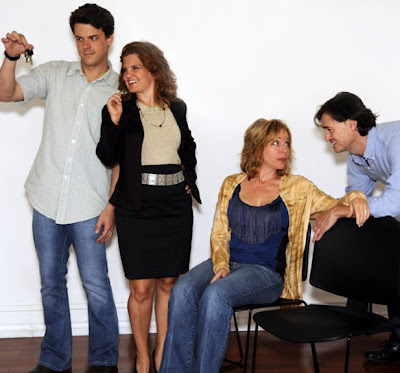 Today I was auditioning in the smaller theatre, which was still an awesome space!

It's always interesting to audition in the theatre itself. Since most auditions are in a brightly lit rehearsal studio, there's something so lovely about walking into a dark, intimate theatre and going onstage into the blinding spotlight, doing a scene, and then leaving the theatre, going back into the "real world."

That little infusion from Bleecker Street must've opened my eyes to the other beauties of the city. On my way back to my support job, I saw this charming little garden outside of a brownstone, and I just marveled at all the work someone had put into it. 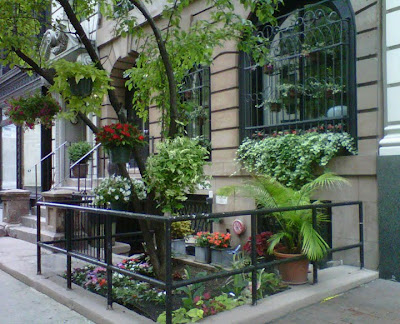 There are so many delights to be found everywhere every day. We just have to be open to seeing them, and take time to nurture them within our ourselves.
Posted by Laura at 12:36 PM No comments:

In the thick of it

Whenever I'm having a challenging day, my friend, Tina, always reminds me that I'm in the thick of making my dreams come true. I'm living it every day!

And I feel that way now more than ever.

Coming off of the Hell's Belles staged reading at HA! Comedy Club, I went right into Committed Impulse Actor Training with Josh Pais, and I feel like I haven't stopped moving. I'm in this... pace! And it's exciting!

You know when you take a class that just turns your head around? It's fabulous! It's also scary and uncertain, but hey, that's life!

And I feel like this wild culmination of all of my studies are coming together: Karen Kohlhaas' classes at The Atlantic (I swear, I walk taller because of her), Carol Fox Prescott's "On the Breath / Joy of Acting," Chas Elliott's vocal coaching, VP Boyle's musical theatre classes, working with my Musical Mondays workshop buddies... everything feels like it's coming together inside of me!

And I LOVE going to auditions! I love riding that wave of energy, going into a room, feeling all that nervous stuff, but also feeling excited about doing my work, bringing a character to life, reading a new script!

Yesterday I went in for Mrs. Warren's Profession, coming to Broadway with Cherry Jones, and I'd never been exposed to the play before, so when I finally got to read it, I was like WOW! SHAW! I mean, all these treasures! Old playwrights! New playwrights! There is so much art on the page of a play!

So of course, I'm always reading. On the subway, my favorite thing to do is to read a scene from a play. I just finished reading Adam Bock's The Receptionist, and it was MIND-BLOWING! I wish I would've seen it when it was playing Off Broadway. And I'll never forget reading Private Lives on the train, reading about these lush tempestuous characters while shuttling under the streets of Manhattan. It's just wild! 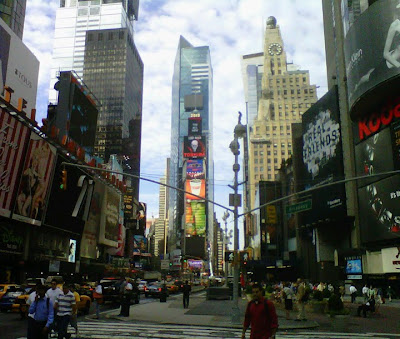 And I'm IN it! Walking out of the Actors Equity building where so many auditions are held, right into the heart of Times Square, being surround by all these wonderful Broadway theatres.

I am here and I LOVE it!

The Next Big Thing

There are 2 questions actors are frequently asked: "What have you been up to?" and "What are you doing next?"

This latter question never ceases to amuse me, because we're often asked this while on the brink of getting one project on its feet. It can be opening night for a show you've spent your blood-sweat-and-tears on, and people still ask, "So.... what's next?"

I especially love when Academy Award Winners are asked this, immediately upon receiving the Oscar, because you can see the shock on their faces. They're so dizzy from the whirlwind of it all.

My favorite answer (often by my favorite actors) is "simply savoring the moment."

Ironically, I'm taking an acting class on this very thing: Committed Impulse with Josh Pais. It's all about being in the moment, embracing uncertainty and riding that wave. It's an AWESOME class!

Now, granted, I know why people want to know "what's next?" It's human nature, looking out there into the unknown, wondering about... everything! And as artists, we have so many projects and ideas bouncing around in our heads. Of course we're always in the midst of building, creating something new. 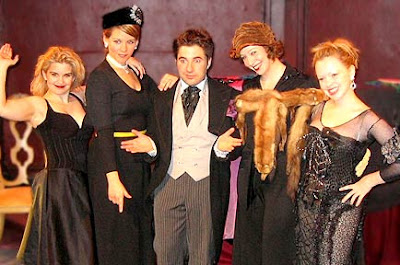 I'm especially excited about this current "What's Next" phase of my life, because I'm working with people who are near and dear to me. Doing the Hell's Belles reading last week seems to have sparked this, because most of the cast and crew (with the addition of the lovely Clare Cooper) returned for the mini presentation at Ha! Comedy Club, and it was a thrill to work with them all again.

Now I'm focused on the Committed Impulse class, really digging it. And I'm working with this great group of actors/singers who have Broadway/National touring credits and we get together every Monday to help each other with auditions and new songs. The talent is just mind-blowing, and we've all talked about putting together some sort of showcase this summer. I think a summer sing-thing would ROCK! :)

I'm also developing a solo performance show called The 20 monologue Challenge, inspired by Karen Kohlhaas' challenge for her students at the Atlantic Acting School. And I have an idea for an original solo show that keeps tugging at my mind. I just need to write it out. 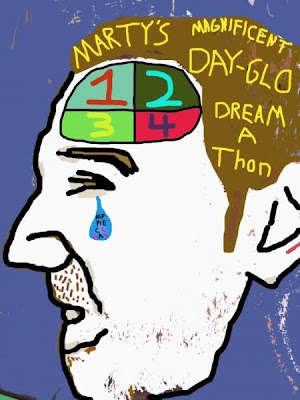 It's based on the concept album by Hippie Cream, and it's about a young man who tries to save his grandfather via his dreams. I'm really jazzed to be a part of this project, because I adore everyone involved, and I love the style of director Daniel Philip Maggio, who directed the Life is Long video and the underground cult film, Brosis. 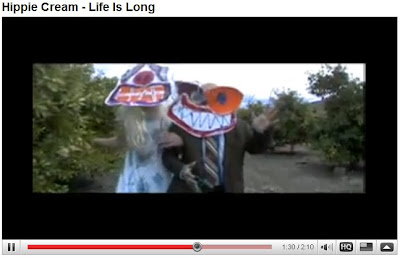 So yeah, there's a lot of groovy stuff in the works, and I'm savoring it all! :)