When I was a kid, I was a tomboy. Totally rough 'n tumble, getting scraped knees, climbing trees. I was an adventurer! And on the flip side of this, or maybe the perfect complement of this, was my love for the library. I was from a small town, so the one place which held the treasures of The World - and experience outside of my small town - was the library! There was a special section for kids, which was very colorful, and once I'd riffed my way through "Little Women," I went into the more grown-up part of the library. This was where I found my haven: PLAYS!

It was a small section. I don't think it took up an entire rack, but I read what I could, and this is where I found Lillian Hellman's "The Children's Hour." 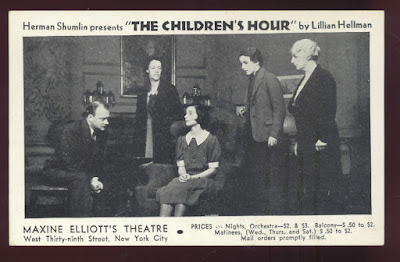 This play was terribly distressful, as I'm sure was Ms. Hellmann's intent, but as a kid, I wondered, Why were the kids so nasty? Why did one of the teachers, Martha, feel such shame for loving her friend that she ended up taking drastic measures to end her suffering?

It's something that stayed with me, and when I moved to NYC and was cast as Jeanine, the title character in "The Tragic and Horrible Life of the Singing Nun," I recognized this same pattern of hiding love because of shame. It was heart-breaking! And while "The Nun" was a musical, it indeed had a tragic love story about two women coming to terms with "the love that dare not speak its name."

(Tracey Gilbert in girlscout-wear above played Annie, Jeanine's partner of many years. We reunited to sing some demos for composer Andy Monroe and his musical The Kid, which was a great, modern love story about real-life-writer and LGBTQ activist, Dan Savage, his partner, and their quest to have a child.)

So when I got to play Alice B. Toklas in Hell's Belles the Musical, I was delighted to learn about women from the early 1900s who lived an openly gay life in Paris.

I did two productions of the show Off Broadway, so I had two "Gerties": Rachel O'Malley (brunette on the left) and Deb Radloff (brunette on the right). Both lovely ladies! And it was interesting to see how the production went from having Gert 'n Alice in top hats and tails (very George and Gracie) to a Coupla Swells in comfortable shoes! Either way, it was fabulous fun, and we brought down the house every time!

The turn of the screw for the real Gert and Alice (below) was that when Gertrude Stein died, their union wasn't recognized by the Law, so all of Stein's possessions, including paintings by their famous friend Picasso, were taken by Stein's relatives. Alice died in poverty. 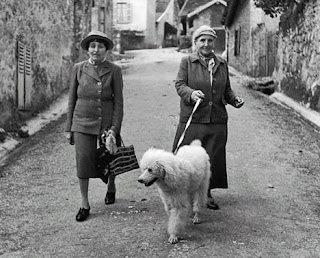 So when Marriage Equality finally came into play, I celebrated BIG TIME with my friends because so many unions could FINALLY be recognized!

There's still a long road to hoe, because many same-sex couples are still turned away from vendors when they want to invest in their weddings, and that blows my mind. One of my favorite playwrights, Bekah Brunstetter is writing a new play about a lesbian couple turned away from a bakery. It's called, The Cake. And my friends, Dwayne Heisler and Chris Defrain (above right) were initially denied their marriage license until the  Supreme Court ruling for Marriage Equality.

Theatrically, I'm happy to say, I'm seeing more LGBTQ love stories coming to the fore. I was part of a lesbian love triangle in the sketch-comedy-with-karoke, "Petunia's Coffee House." 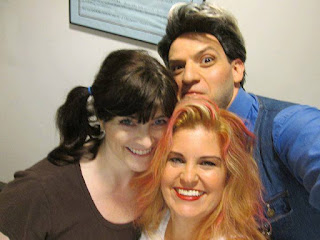 My character DAR, became a bit of a hero for me, because she didn't take shit from anyone! She was based on Melissa Ethridge, the motorcycle mamas that lead the Pride March, Thelma and Louise, Stevie Nicks, and Jim Morrison. 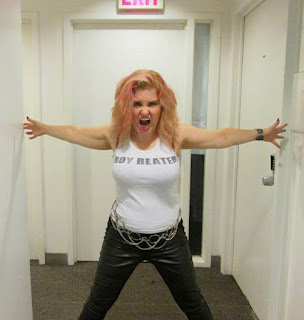 Speaking of heroes, one of my favorite actor-playwrights, Joe Gulla, has performed several of his works at Joe's Pub, including The Bronx Queen, and the upcoming Faggy at 50. 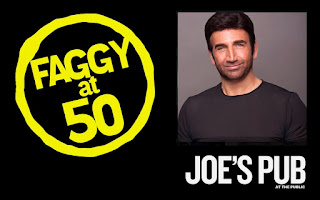 I met Joe a few years ago when he was casting his play, Garbo. I didn't get the gig, but he kept calling me back for other projects, and last summer we did a reading of his play, "Sleeping With The Fish" at the LGBTQ Center. 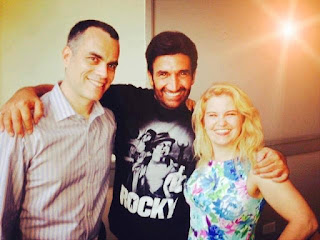 I was the observer of a love affair between two mobsters, and let me tell you: It was delicious!

So where would we be without these stories, these beautiful stories of love and pride? Love is part of every human experience, and I hope we continue to grow with PRIDE in each other, and recognize that everyone deserves equal rights.

With thanks to Lin-Manuel Miranda. :)

It's been an incredible year of delicious acting work, and it all started at the New Year when I got called in for "Steel Magnolias." That same week, my best friend from college, Wendy Ruth, brought her family to the city, and we saw Dear Evan Hansen. Wendy worked with Kristolyn Lloyd at Disney, and I had studied with Rachel Bay Jones, so it was incredible to see them and celebrate their success. 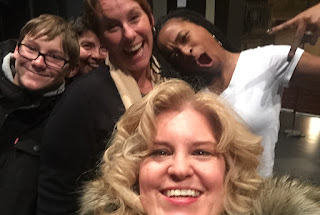 We went backstage after the show, and Wendy made introductions, telling them how I'd just gotten called back for Steel Magnolias. I'd had to juggle my callback in order to make the curtain for Dear Evan Hansen, but the director, Angela Shultz (below right), was awesome and said, "Of course! Get going! I have tickets to see it next week!" 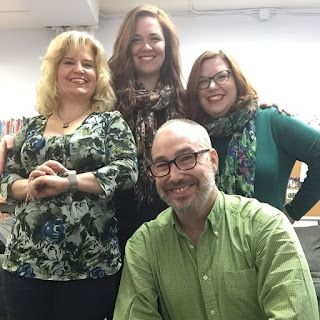 I found out the next day that I booked Truvy in Steel Magnolias, performing in March in NYC! What a dream come true! I got to work with all these amazing people, including Melissa Harlow (above center) co-founder of Stomping Ground Theatre Company, and Chad Anthony Miller, co-producer and all around Renaissance man!

In the midst of rehearsals for Steel Magnolias, I was interviewed by Indie Activity, and got a call from Mike Jones to guest star on his webseries, The Mike Jones Show. SUPER fun! I played the winner of the lottery! 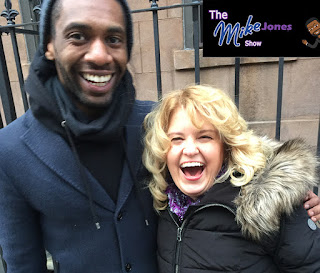 Then I did Steel Magnolias, and just drank in the beauty of that experience. 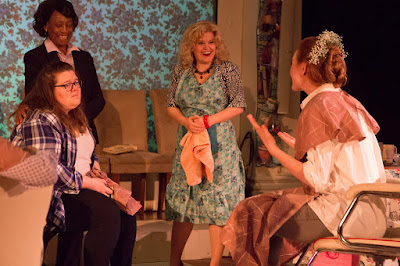 When April hit, my husband and I went to see the legendary ladies of Sunset Boulevard - Glenn Close was heartbreaking! - and War Paint. Patti LuPone and Christine Ebersole were FANTASTIC! Talk about a masterclass in stage work from all three divas! Simply amazing! 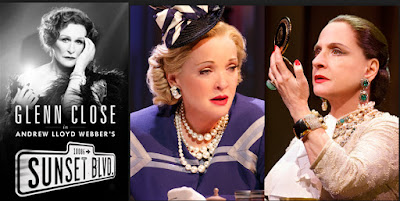 Then my best friends took us to see The Great Comet for my birthday! 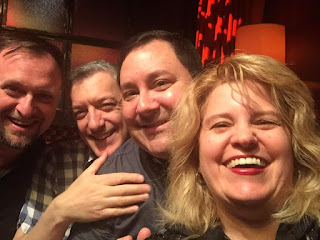 I also received a gift of Sunday in the Park with George, which was GORGEOUS! 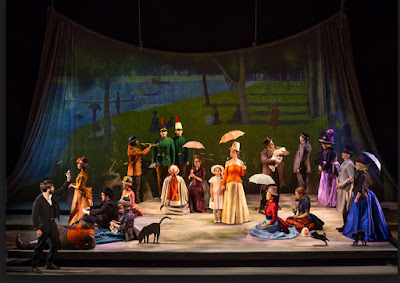 I know that show well, but I heard lyrics as if for the first time. It was SO beautiful!

Then I sang in a concert with my dear friend Tracey Gilbert, celebrating producer George DeMarco. We all met during The Tragic and Horrible Life of the Singing Nun at NYMF, and it was such a thrill to revisit that piece! 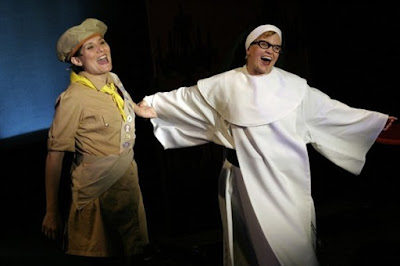 I kicked May off with Six Degree of Separation and the fabulous Allison Janney and Corey Hawkins. I'd only seen the movie before, so it was a treat to see it live. I really loved how much deeper the play was. So many great monologues about life, humanity, connection and philosophy. 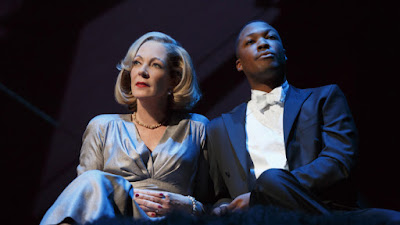 I was also honored to revisit Pat the Park Ranger from Sasquatched the Musical when the creators asked me to do a recording of my big song. 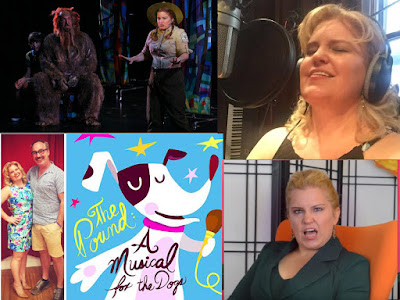 Then I started rehearsals for The Pound and made my debut at Signature Theatre, a gorgeous Off Broadway theatre! And I was called back for the new web series, Human Telegraphs, recalling feisty ladies with power whom I've played over the years.

Speaking of powerful women, I was blown away by A Doll's House 2. The music and speech were modern, but the clothes and story were antiquated in which a woman was still beholden to her husband and could go to jail for "living a free life" if she wasn't properly divorced. It felt so intense, especially in this political climate. When the lights went out on Nora's exit and the audience erupted with applause, I sat there stunned. I couldn't move. It was like a tidal wave of emotion had hit me. Nora's journey, beautifully played by Laurie Metcalf, just vibrated through my entire being. It was an incredible experience! 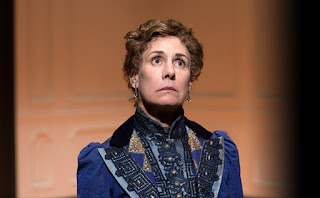 Then I got to see The Little Foxes, which was excellent! Laura Linney and Cynthia Nixon trade off the roles of Regina and Birdie, and I marveled at their dexterity. My best friend and I saw the Sunday matinee. Laura Linney, who had played Regina the day before, was playing Birdie, and it was as if she had inhabited that character for years. She made me cry! 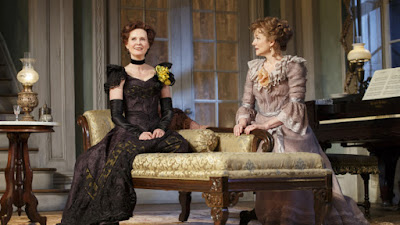 I'm so inspired by all these amazing performances I've seen, as well as all the beautiful pieces I've been honored to perform in this year. It's been deeply fulfilling work, and a very busy first half of the year. I'm excited to see what's around the corner :)