I've been having a BLAST with the beautiful ladies of "Steel Magnolias." Our director, Angela Shultz, has such a clear vision, and our stage manager, Melissa Harlow, is so on top of everything! They are both fearless and fabulous!

Last night we got our salon chairs - thanks to Mel driving throughout Jersey for 'em - and everyone took a spin!

I'm already in love with this cast! Katie Donnelly is hilarious as Annelle, Joan Valentina is pure class as Clairee, Anna Laura Strider is the perfect Shelby, Katherine Alt Keener is heart-breaking as M'Lynn, and Rebecca Hoodwin is going to steal the show as Oiser! What a talented group of ladies!

Katherine Alt Keener who plays M'Lynn said last night, "This feels so comfortable!" It feels like we've known each for years!

Each actress is being introduced on Facebook on the Stomping Ground Theatre Company page, so y'all come visit, ya hear! ;) 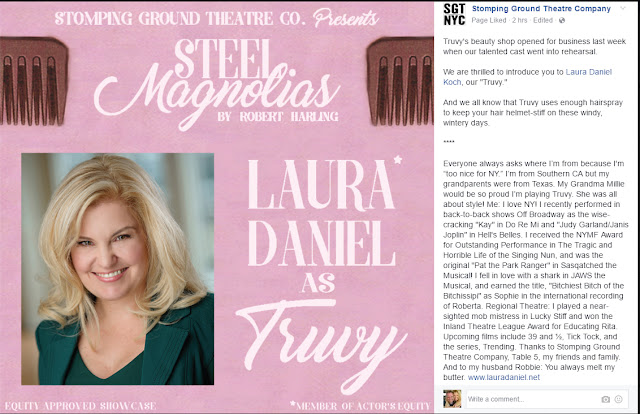 Everyone always asks where I’m from, because I'm “too nice for NY.” I’m from Southern CA but my grandparents were from Texas. My Grandma Millie would be so proud I’m playing Truvy. She was all about beauty and style!

Me? I love NY! I recently performed in back to back shows Off Broadway as the wise-cracking Kay in Do Re Mi and Judy Garland/Janis Joplin in Hell's Belles. I received the NYMF Award for Outstanding Performance in The Tragic and Horrible Life of the Singing Nun, and was the original Pat the Park Ranger in Sasqatched the Musical! I fell in love with a shark in JAWS the Musical, and earned the title, "Bitchiest Bitch of the Bitchissippi" as Sophie in the international recording of Roberta. Regional Theatre: I played a near-sighted mob mistress in Lucky Stiff and won the Inland Theatre League Award for Educating Rita. Upcoming films include 39 and ½, Tick Tock, and the series, Trending. Thanks to Stomping Ground Theatre Company, Table 5, my friends and family. To my husband, Robbie: You always melt my butter. :)
www.lauradaniel.net
Posted by Laura at 1:06 PM No comments:

This month I started rehearsals for "Steel Magnolias," the play by Robert Harling, which was written for his sister. We open one month from today on 410 West 40th Street. Tickets are $18 and the cast is a wonderful group of women with a wealth of theatre experience! 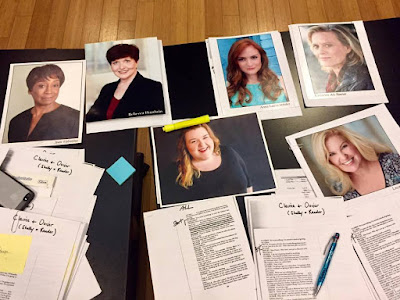 (Left to Right): Joan Valentina as Clairee, Rebecca Hoodwin as Oiser, Katie Donnelly as Annelle, Anna Laura Strider as Shelby, Katherine Alt Keener as M'Lynn, and Laura Daniel (me) as Truvy.
Stomping Ground Theatre Company is making it all happen, and they're a fearless new non-profit company creating "a home away from home for the socially conscious." They are FABULOUS ladies! Angela Shultz is directing (below far right) and Melissa Harlow (center)is our sensational stage manager: 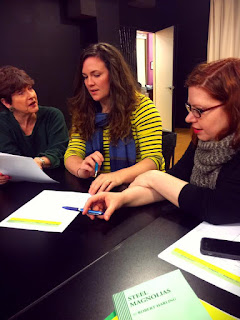 For those who don't know "Steel Magnolias," it was originally done Off Broadway in 1987 and ran until 1990 after 1,126 performances. The Hollywood film was released in 1989, and the play made its Broadway debut in 2005. Lifetime created a TV movie in 2012 with Queen Latifah.

It's a truly beautiful story about 6 women, three generations of resilient Louisiana ladies who live as large as they can in their small town.

In the play, it all takes place in Truvy's Beauty Shop, which is a place of laughter and love and some big secrets! As Truvy, I'm certainly delighted to be making some magic happen! "Let me get my magic wand and some fairy dust! And use as much hairspray as you want!" ;)

Hope to see y'all  next month! 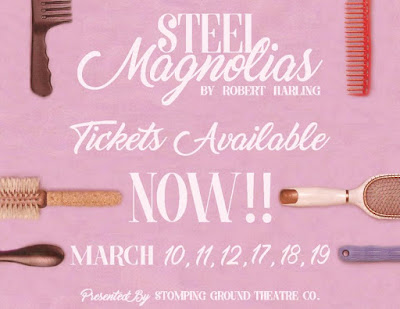